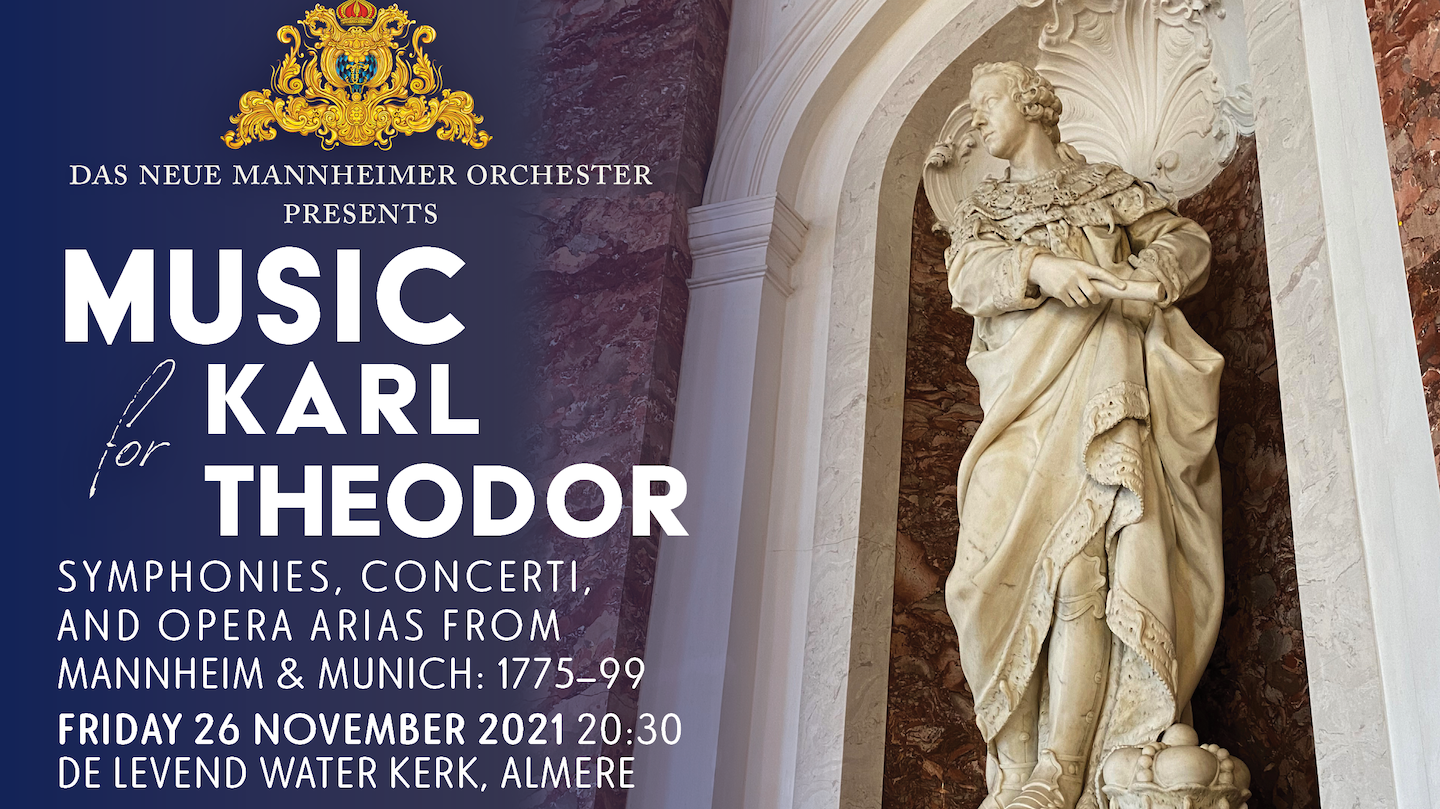 Das Neue Mannheimer Orchester presents an orchestral concert on period instruments of beautiful yet forgotten music from Karl Theodor's courts in Mannheim and Munich during the time of Mozart in the closing quarter of the 18th century. The concert is supported by the Provincie Flevoland.

While Mannheim today is a relatively typical industrial city in southwest Germany, as the former capital of the Electorate of the Palatinate, it was regarded in the 18th century as a new “Athens on the Rhine.” This was due in part to the efforts of its ruler, Elector Karl Theodor, who, unlike his many contemporary rulers who invested their treasury in war-making and territorial expansion, invested heavily in arts, culture, and sciences. Taking his cues from the Enlightenment philosophies of his time, Karl Theodor sought to create a harmonious society built on knowledge, reason, and artistic expression. He opened his library, galleries, concert halls, and theatres to his subjects, poured money into the construction of astronomical observatories, and attracted all sorts of painters, sculptors, classicists, garden planners, architects, writers, philosophers, scientists, and musicians from all around Europe to his court, where they all intermingled and created a new intellectual boon. It was under this inspiring climate that the Mannheim court orchestra (1742-78) became the most prominent in Europe. Not only were its performances of the music of the finest composers of the day considered first rate, but also were its own school of composers, virtuoso players, and innovative style. Musicians from all around Europe came to Mannheim, and this cosmopolitan cultural exchange was highly encouraged and funded by the state. The Mannheim school of composers had a profound influence on later composers like Mozart and Haydn, and Mozart notably sought employment in Mannheim, albeit unsuccessfully.

Upon the death of Maximilian III Joseph of Bavaria in 1777, Karl Theodor would inherit his title, and his court would move to Munich. As a generous patron of the arts and sciences, Karl Theodor brought his former Mannheim Court Orchestra with him to Munich, where it continued with many of the same personalities, including director Christian Cannabich. It was here where the Elector commissioned Mozart to write his Italian opera seria Idomeneo in 1781. The elector would later establish a German National Theatre to produce German operas, for which many of the former Mannheimers wrote. Although declining somewhat with various budget cuts, the style remained influential to the Viennese Classicists like Mozart, Haydn, and Beethoven and laid the groundwork for the emerging Romantic movement in the early nineteenth century.

Yet, despite these grand and enticing qualities, this repertory remains largely forgotten today, alongside the cultural legacy of Karl Theodor’s court. We were inspired to revive this music not only for its great qualities, but also to bring light to the story that it represents: a cosmopolitan group of creative individuals, all working together and inspiring each other with their diverse perspectives, bringing new innovations to music that brought joy, truth, goodness, and authentic human expression to the whole community. This sort of societal harmony is just as inspiring and important today as it was in the 18th century; especially now that we are more divided than ever.

Das Neue Mannheimer Orchester (DNMO) was established in late 2016 in The Hague by Canadian harpsichordist and fortepianist Anders Muskens with the aim of recapturing the spirit of music from the period of the original Mannheim Court Orchestra – including late Baroque, galant, Classical, and early Romantic – and especially from composers of the Mannheim School. As an early music ensemble, DNMO plays on period instruments using historically informed techniques. It is made up of young professional early music specialists, and is a highly international group featuring talents from the Netherlands, Belgium, Germany, Austria, France, Italy, Poland, Spain, Japan, Korea, Argentina, Colombia, Brazil, Australia, Canada, and the United States.

In November 2018, the ensemble was awarded the „Hofkapelle Elbe-Elster“ für das Jahr 2019 prize at the „Gebrüder Graun Prize“ 2018 in Bad Liebenwerda, Germany. DNMO has played at the Utrecht Early Music Festival Fringe in 2018-19; and the Wahrenbrücker Graun-Festtage 2019. DNMO has produced several operas, including a revival production of Johann Christian Bach's opera seria, Carattaco, in February 2020; and a revival of Gian Francesco de Majo’s opera serenata, La gara delle grazie at the Grachtenfestival in Amsterdam in August 2020. DNMO was invited to play on Dutch national television’s Podium Witteman (NL) in April 2021 in a segment on the music of the Mannheim Court, and in the summer of 2021 produced a series of concerts supported by the Fonds Podiumkunsten Balkonscènes Fond (NL). A further concert in Almere was supported by the Province of Flevoland (NL) in November 2021. In April 2022, DNMO will perform a large orchestra concert for the first time at the Schwetzinger SWR Festspiele (DE) in one of Karl Theodor’s palaces.

With the support of SENA, the Canada Council for the Arts, the Alberta Foundation for the Arts, and the Adriana Jacoba Fonds, DNMO has produced a number of commercial CD recordings including the “Army of Generals” anthology series, released by Etcetera Records.

DNMO is committed to challenge established boundaries and conventions of the Classical Music world with the goal of rekindling the passion of eighteenth-century performances. With the collaboration of various musicologists, DNMO has a number of research initiatives to better understand and reconstruct eighteenth century orchestral performance practices. In addition to presenting music from well-known masters, DNMO seeks to present music of lesser-known composers which is equally worthy of performance.

Other events from the organiser

Other events from this category